Commonly referred as mealworms, yellow mealworms, mealworm beetles, darkling beetles, and darkening beetles, Tenebrio molitor is an insect which is eaten in the larval stage. Not to be confused with superworms or the less common mini-mealworms. The larvae grow to about 1 inch in length and are light brown with darker brown stripes.

There is conflicting information about whether or not the adult beetles of this species fly, with some sources claiming that they do not, while others claim that they generally only fly in search of food, so those in captivity rarely will. [1]

The first record of mealworms in North America was in 1827 in Nova Scotia.[2] They reportedly occur in temperate regions all across the world, but especially in the northern hemisphere.[3] Typically, they are found in or near human civilization because they thrive on grain and flour. They cannot breed in the tropics.

Only the larvae of Tenebrio molitor is consumed—the adults have a hard shell and emit a foul odor from their scent glands when threatened.

Sauteeing is a popular method for preparing mealworms. Rapid cooking over high heat can cause the larvae to explode, so pan-frying is not recommended. Boiling, roasting, and deep-frying are other common methods of preparation. Marc Dennis, founder of Insects Are Food, recommends freezing mealworms for an hour and then boiled for one minute before using them in your recipe.[4]

The flavor is most described as nutty.

Tenebrio molitor is extremely easy to breed in either small or large amounts. They can be fed on oats or bran and given some carrot, apple, or potato for moisture. The adults should be removed from the main enclosure to prevent them from eating the eggs. 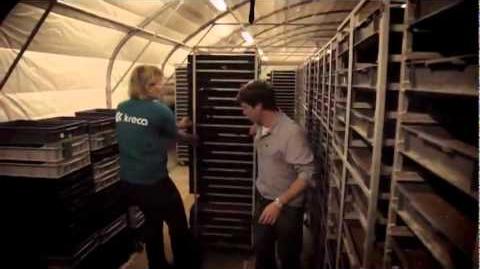 There are no known legal issues with import, export, or sale of mealworms.

Community content is available under CC-BY-SA unless otherwise noted.
Advertisement